I’ll admit, I didn’t know much about ‘Field of Lights’ before booking my tour, but having seen the photos online, I knew it was the one thing I had to do at Uluru. What I’ve learned since then, is the following:

British artist, Bruce Munro, created the Field of Lights art installation after Munro spent eight years in Australia. The travelling exhibition, which began in the United Kingdom in 2004, was in fact, inspired by Uluru. Finally, it has come ‘home’.

It’s Pitjantjatjara name, Tili Wiru Tjuta Nyakutjaku, means ‘looking at lots of beautiful lights’. It consists of more than 50,000 slender stems crowned with radiant frosted-glass spheres over an area the size of nine football fields. Pathways draw viewers into the global phenomenon, which comes to life under a sky brilliant with stars. These individually hand-crafted stems, weighing a total 15 tonnes, can be seen at both sunset and sunrise, and have been featured in the United States, UK, Albany, South Korea and Denmark. It will continue to be displayed at Uluru until 31 December 2020.

Having seen availability online the night before, we called first thing in the morning to try and book the sunset tour for when we arrived in Yulara that night. For $42, we’d be able to see Uluru at sunset, with an hour to explore after dark. Somehow, from the night before to the morning, it was unexpectedly unavailable until Wednesday evening. Disappointed, as a group, we decided we’d pay the extra ($75 per person) and go see a sunrise viewing in the morning instead.

You would not believe what we went through the morning of this tour… our bad luck continues.

Surely The Tour Is Cancelled After That Wicked Storm…?

It started with a 03:45 alarm. It was still dark out, and the horrific lightning storm we experienced only hours before had not yet let up. Some of us were in the cars, while others actually tried to sleep in a wet tent, but no one felt very rested. In fact, at this time, only 5 of us were even remotely awake.

Reception at the Ayers Rock Campground had informed us that the Field of Lights evening departures had been cancelled for the following night, due to the predicted lightning storm (and what a storm it was). Surely, our tour will be cancelled in the morning too, with all the rain, wind and destruction from the storm? Ok, the lightning had stopped, but would it really clear up in time for sunrise? I was sceptical. Would it be worth the money we paid if it was even going ahead in this weather?!

Too cold and wet to get out of our cars, we began discussing a game plan over the car walkie-talkies. Aware that time was passing, a bus would be at the campground to collect us at 04:20, if it was to arrive at all, and we still couldn’t decide what to do. Alex tried to call the tour company, while I checked my emails for any notice of cancellation. No luck reaching anyone or gathering more information.

We had just about talked ourselves out of it when the rain began slow. It was 04:15 which meant we’d have 5 minutes to make it to the bus stop and see what’s going on.

John, Aaron and Jacob were still sleeping in the tents. Torn about what to do, Matt and I jumped in Velvet Thunder with Ramsay, Alex and Jeremy, hoping the tour bus would turn up.

We Left Half Our Group Asleep In Their Tents

Sure enough, as we round the corner and turn on to the main road, an ‘AAT Kings’ bus arrived to pick us up. We begin to panic, knowing half our group was asleep. The guide was pressuring us to get on the bus, so as not to hold up the rest of the tour, which I totally understood, but what were we to do?! She noticed 3 from our group were missing and suggested we follow the bus and park our car at the next hotel, giving us time to collect the others.

Stupidly, all 5 of us got back in the car and drove back to the campsite. At this point, Aaron, Jacob and John were awake and messaging us, but were rightfully confused about what was going on, and therefore not ready when we arrived. We called Aaron and as we pulled up to the tents (or what was left of them after that storm) and began screaming for them to hop in the car immediately. It was then we realised there wouldn’t be enough room, and as they weren’t ready, we drove off.

Thankfully, we made it to the next stop and ran onto the bus, but we felt awful about what had happened and for leaving the boys behind.

Within 20 minutes, everyone else had been collected for the tour, and we had arrived at the Field of Lights. We tried asking our guide for details as to where the site is, and how our friends could get there, but she informed us the tour was located on private property so they wouldn’t be able to come after missing the bus.

With everyone off the bus, we began to follow the path to the viewing platform. Wow, that’s actually really cool. 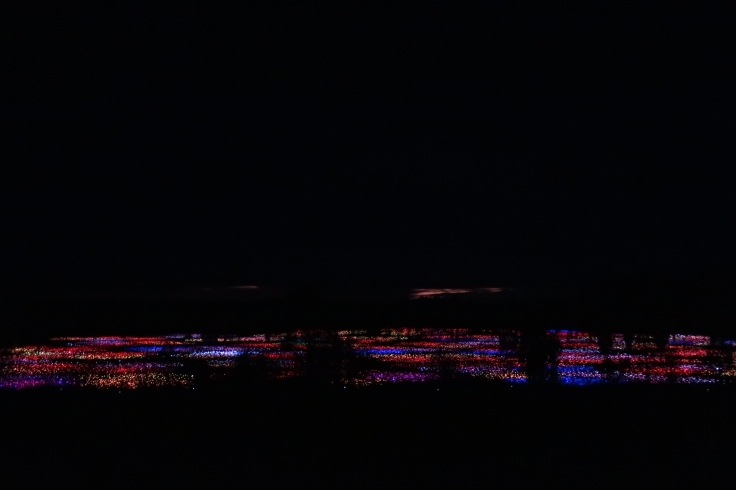 Suddenly, Matt stops and takes a phone call. He grins and says the boys are parked behind the bus. The rest of us hang around the back of the tour group so as not to hold everyone up again, while Matt went to find them.

Next thing we know, everyone is together. Somehow, we all made it!

Our Time At Field Of Lights

The exhibition was beautiful. We walked some of it as a group and then split off to take photos of our favourite parts. The colours were vibrant in the dark night, and we watched as everything began to soften with the rising sun. 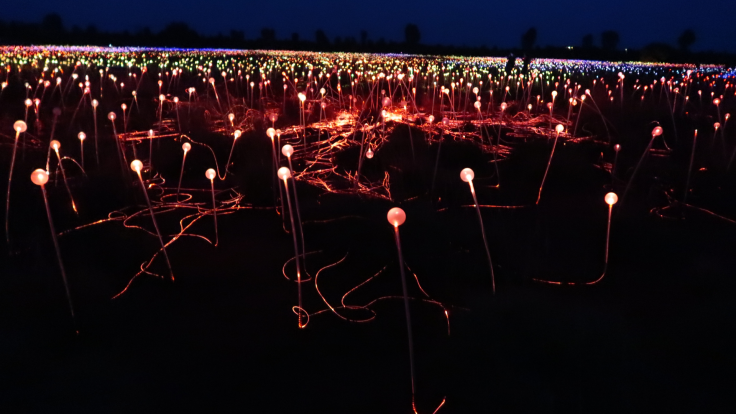 It didn’t stay dark for long. We had about half an hour before the sky was too bright for the lights, and colours began to fade away.

Everyone made their way back to the viewing platform, and with a hot drink in hand, we anxiously awaited to see Uluru and hoped for clear skies.

Unfortunately, it continued to rain.

To top it off, the guide told us the boys could receive a fine of up to $10,000 for driving up private property. Apparently, security arrived to remove the vehicle, but the boys were already in the field (and technically had tickets to the tour).

All we could do it laugh uncontrollably about everything that had happened. At least we all made it to Uluru and our sunrise Field of Lights tour! 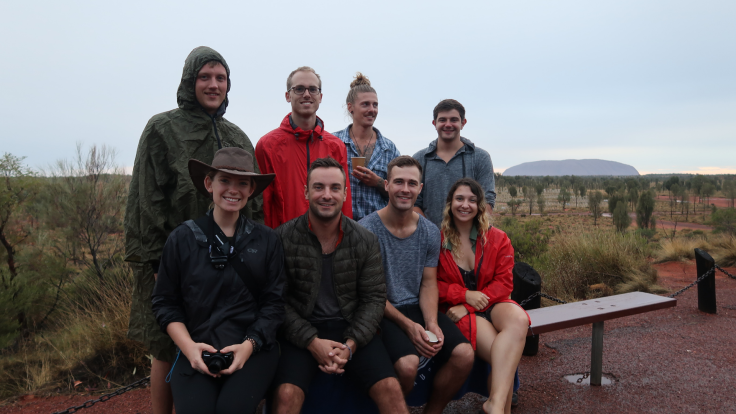 My Thoughts On Field Of Lights

The exhibit was beautiful, and despite everything that we went through, I would still recommend visiting. That being said, I would have done a few things differently. Most importantly:

The tour provider, AAT Kings, is incredibly difficult to reach, and their office hours are limited. You can check the status of the tour with your local accommodation in Yulara. Make sure to have your camera and a good pair of walking shoes, as you make your way through the changing lights. Complimentary drinks are included, but with the heat in Red Centre, a bottle of water is a good idea too.

3 thoughts on “Field of Lights Uluru”