Atmosphere: 6/10
The town of Airlie Beach is really busy, but it appears that most backpackers only stop here for the Whitsundays. YHA Airlie Beach had a large kitchen/lounge, where we spent a morning sleeping before we were able to check in (we weren’t the only ones doing this). No one really spoke to one another and sat alone to use the free wifi on their chosen device. Thankfully, the wifi didn’t reach the room, and our roommates were very chatty. Some had come back from their Whitsunday tour and slept in the afternoon before going out at night, while others were heading out the following morning and had tons of questions. We had a small balcony that overlooked the pool, but we didn’t see anyone using it.

In reception, you will find the most adorable puppy, named Caesar. He’s a border collie and only a few weeks old, so still very playful. He could be seen in the courtyard, melting the hearts of guests (mine included).

Cleanliness: 9/10
The hostel was kept very clean, by both staff and guests. Each visit to the kitchen, staff could be seen giving it a tidy. There were no dishes left out or rubbish on the floors. We appreciated that YHA Airlie Beach had a rubbish bin and a clearly labelled recycling bin in all common areas.

The rooms were spotless! Beds were new, clean and sheets smelled fresh. The en-suite bathroom had a few bits and bobs on the counter, but they clearly belonged to guests.

The bins were changed each morning and the floors swept. Nothing was left out of place in the communal areas or outside on the picnic tables. The only room that wasn’t kept to the same standard was the locked, communal shower. It was old and grimy, with shampoo bottles and used razors were seen on the shower floor, but those were gone the second time we used it.

Facilities: 7/10
The layout of YHA Airlie Beach was similar to that of a motel. All the rooms were located from the first floor, upwards, and each had it’s own balcony, with chairs and drying racks for clothes. The rooms had an en-suite and air conditioning, and plenty of plugs to share amongst the guests. The pool was a decent size, and clean, although we didn’t see anyone use it. Lockers were provided in the rooms and for hire.

The kitchen was fully equipped, with 4 large fridges and plenty of shelf space. Attached was the communal area, which offered 4 sofas, a bookshelf and a tv. We understand the wifi was slow when lots of people were around, but adequate to use nonetheless.

Location: 9/10
The hostel was less than a 10-minute walk from the Greyhound bus stop and roughly a 20-minute walk to the marina, where most of the Whitsundays boats departed from. Located on the high street meant bottle shops, Woolworth’s, pharmacies, clothing shops and restaurants were right on the hostel’s doorstep. Perfect location!

Room: 10/10
YHA Airlie Beach offered the Best layout we have come across, for an 8-bed dorm. There was loads of room around and under beds, so the floors were kept tidy. Large lockers, which could fit up to a 60L pack each, were placed between the beds. There weren’t any plugs near the beds, but more than enough for everyone to use on the wall opposite, with a shelf to hold any phones or computers. The room had its own en-suite bathroom with shower and separate toilet, but the windows didn’t close properly. We kept the door to the bathroom closed, so the air conditioning would still keep the room cool. The best part was the balcony, which offered a roof cover, plenty of chairs and a clothes horse. Our clothes were able to dry without clogging up the room or making it look messy, and we sat outside a few times listening to the rain.

Security: 10/10
There wasn’t a ‘front door’ into the hostel, but keys were required everywhere. Although there were large lockers in the dorm rooms, YHA Airlie Beach also offered lockers for hire, which we used to store our things while we were on our Whitsundays tour. These additional lockers cost $5 a day and required your own lock, but the room was closed at night by the reception, ensuring extra security. The communal shower and toilets were closed, and reception had to open it with a special key for use and when the communal area closed at 9pm, it could be opened upon request for guests.

Staff: 9/10
We only met two members of staff at reception. Both were friendly and gave us advice about the local bottle shops, the pharmacy and how to pass a few hours before our boat departed. The owners had a small puppy (image above in Atmosphere) who could be found in reception, entertaining guests.

Overall: It was a little quieter than we would have liked, but we enjoyed our stay at YHA Airlie Beach! The hostel was very clean and offered a great nights sleep, especially after coming off a cramped boat. We would definitely stay here again.

Pin it for later! 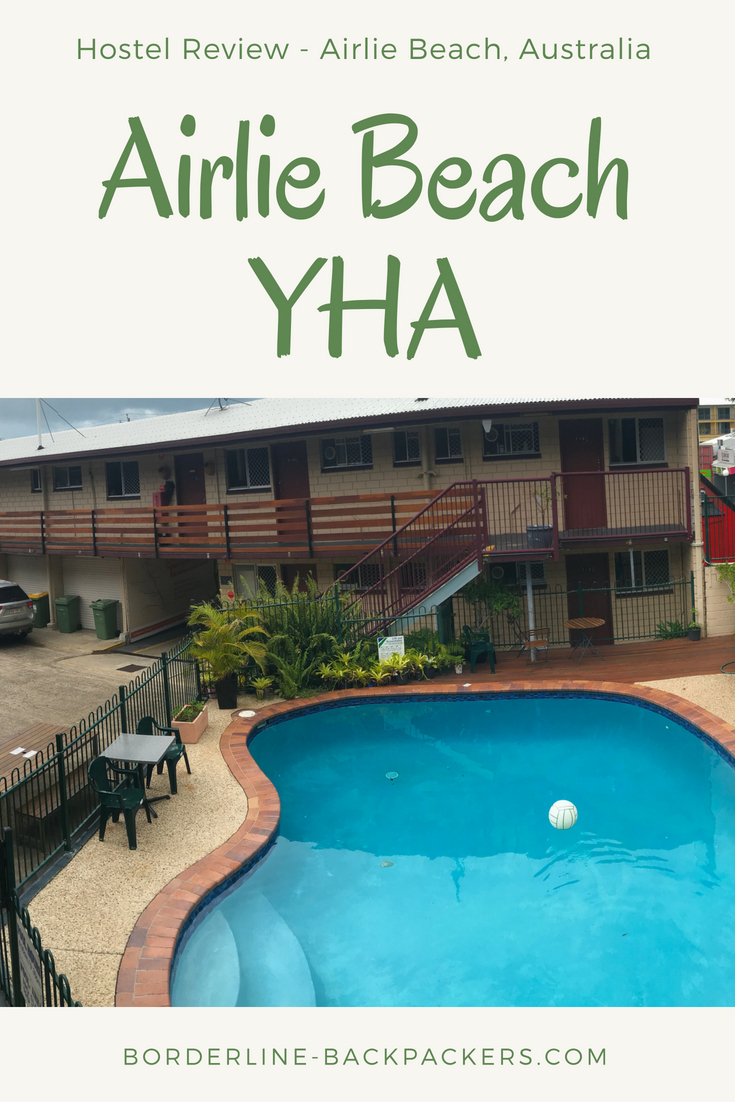 One thought on “Airlie Beach YHA”