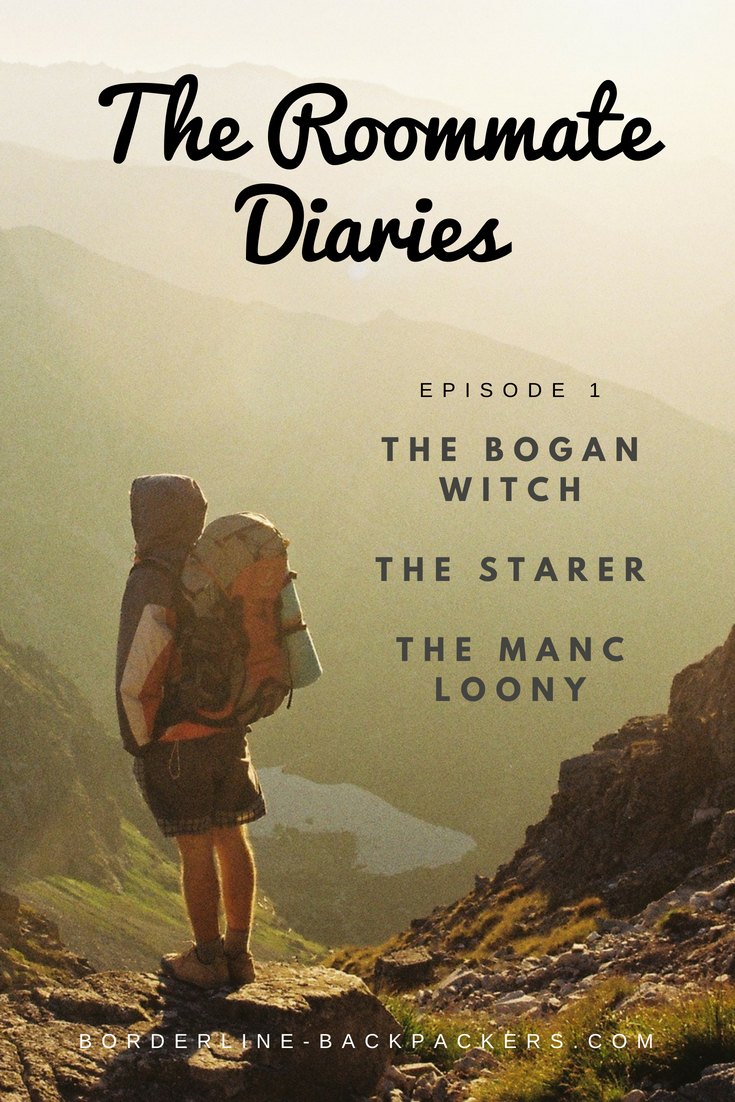 Welcome to first ever episode of The Roommate Diaries! If you’re wondering what exactly this series is about, feel free to check out the introduction here.

In Australia alone, we’ve stayed in over 20 different hostels, and have met hundreds, maybe even thousands of backpackers along the way. Here are a few of them that we won’t forget in a hurry.

On our first day in Sydney, jet-lagged and hangry, we stumbled out of bed and went down before the hostel free breakfast ended. There were a few scattered plates and mugs left by other guests in the common area/kitchen, but we didn’t notice much while chatting with the hostel staff who offered to make me a cappuccino. I made some toast and sat down at an empty seat; Ally made a bowl of cereal and sat down, at what appeared to be an empty seat next to me. About 10 seconds later, this wrinkly old, witch of an Aussie woman came over, glared at Ally and said,

“I guess I didn’t piss on my territory hard enough then”.

Confused, and frankly lost for words Ally just said: “Excuse me?”. Her face contorted, she rolled her eyes at Ally and said, “You must not have seen my mug there, marking MY seat while I was making breakfast”. Ally apologised, explaining she didn’t see know the mug was ‘holding’ a seat, and that there were actually quite a few random mugs, plates and cutlery across the table. The Witch ignored Ally’s comment and went on eating her breakfast. As we continued on with our conversation, she interrupted us to say,

“You’d better keep your eyes open and watch yourself love; you might get away with it here, but you won’t survive out there“.

Obviously, she was referring to the rest of the city. Safe to say Ally was pretty shaken up, and we made every effort to avoid this hag for the remainder of our stay.

The Starer — Various Locations Along the East Coast of Australia

There’s not too much to say about this guy, except he’s like one of those paintings that looks like it’s staring at you wherever you are in the room… except, he actually was staring at you. It wasn’t just one of us though, other friends in our room and even other guests at the hostel all mentioned how weird it was, that he would just stare at everyone. We’ve actually come across this particular person a few times on our journey up the east coast, and he never spoke with us, even when we smiled or greeted him in passing. I could always feel his eyes on me though, making me feel a bit paranoid. Is there something on my face? Do I look like someone he knows? I guess we’ll never find out!

About a week into our trip, our mate Vinnie mentioned he met this weird guy in his room, whom Vinne had just found sobbing in his bed. They start chatting and the guy began to calm down… he’s from Manchester, just finished uni and had come to Australia on the working holiday visa. He seemed normal enough, so Vinnie asked him why he was so upset. The ‘Manc Loony’ then explained he was hiding in the hostel because someone was following him… At the beginning of his trip, he had met and started dating a girl from Europe. He described her as pretty and fun but didn’t really notice what was going on until it was too late. She would ask him to buy her things using his cards, online accounts and address, which she would pay him in cash (coming from a job where I had to investigate money laundering, alarm bells were already ringing for me). This girl was always texting random numbers with no names, and when he asked about who she was messaging, she would get very defensive. At one point, he thought she had bugged his laptop and phone to spy on him. Before the situation escalated and got more confusing, the Manc Loony ended the relationship. After doing this, he was completely unable to contact her, as if she’d dropped off the face of the earth.

The Manc Loony then started noticing people following him in public places, and sometimes, those people would even follow him back to the hostel (the very one we were staying in). Apparently, one afternoon, he walked into his dorm room and there were 3 burly guys in smart clothes, who looked at him, and then all sat down at the same time, pretending to be doing something. He said none of these men had luggage, and would just sit in silence. He could feel these strange men watching him and had to ask for a new room!

This last bit is where it really gets crazy… the Manc Loony had just bought new construction clothing and boots for a job he was going to start the following week. The reason he was sobbing when Vinnie found him, was because his new work clothes and boots were worn, covered in dirt and now two sizes smaller than the one he’d bought. He believed he was being hunted by the Sydney Mafia, for something his ex-girlfriend did. I think he was even convinced Vinnie was in on it. In a panic, he called his dad and bought a flight back to England, leaving half his belongings in a rush to catch the flight.

We never saw or heard from, the Manc Loony again.