Travelling has changed my life forever; it has made me more independent, responsible, honest and thoughtful. Along the way, I have encountered many different kinds of people, who taught me about their languages, culture and history, as well as acceptance and open-mindedness. I have experienced every range of emotion and pushed myself to break the limits and barriers I didn’t know I had. From each journey, I return home with new memories and scars, a little wiser, a little stronger, and certainly, a little bit older.

If you’re wondering whether or not to quit your job and travel the world, here are 50 travel quotes to inspire your next adventure:

2. “I travel a lot; I hate having my life disrupted by routine.” – Caskie Stinnett

5. “Travel doesn’t become adventure until you leave yourself behind.” – Marty Rubin

7. “Wherever you go becomes a part of you somehow.” – Anita Desai 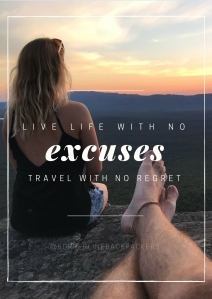 8. “It is not down in any map; true places never are.” – Herman Melville

9. “To travel is to live.” – Hans Christian Andersen

10. “Live life with no excuses, travel with no regret.” – Oscar Wilde

13. “One’s destination is never a place, but always a new way of seeing things.” – Henry Miller

14. “A good traveller has no fixed plans and is not intent on arriving.” – Lao Tzu

16. “I am not the same, having seen the moon shine on the other side of the world.” – Mary Anne Radmacher 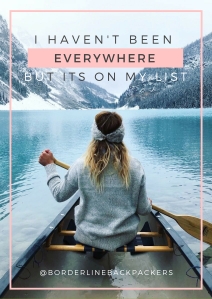 19. “Travel is never a matter of money but of courage.” – Paolo Coelho

21. “The most beautiful in the world is, of course, the world itself.” – Wallace Stevens

23. “Live life with no excuses, travel with no regret” – Oscar Wilde

24. “Two roads diverged in a wood and I, I took the one less travelled by.” – Robert Frost

25. “Stop worrying about the potholes in the road and enjoy the journey.” – Babs Hoffman

26. All journeys have secret destinations of which the traveller is unaware.” – Martin Buber

27. “There was nowhere to go but everywhere, so just keep on rolling under the stars.” – Jack Kerouac 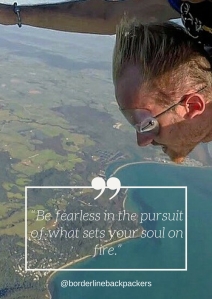 29. “The world is a book, and those who do not travel read only one page.” – Saint Augustine

30. “Be fearless in the pursuit of what sets your soul on fire.” – Jennifer Lee

31. “Remember that happiness is a way of travel – not a destination.”  – Roy M. Goodman

32. “Man cannot discover new oceans unless he has the courage to lose sight of the shore.” – Andre Gide

33. “Travel makes one modest. You see what a tiny place you occupy in the world.” – Gustave Flaubert

34. “The gladdest moment in human life, methinks, is a departure into unknown lands.” – Sir Richard Burton

35. “Twenty years from now you will be more disappointed by the things you didn’t do than by the ones you did do.” – Mark Twain

36. “Once in a while it really hits people that they don’t have to experience the world in the way they have been told to.” – Alan Keightley

37. “I can’t think of anything that excites a greater sense of childlike wonder than to be in a country where you are ignorant of almost everything.” – Bill Bryson

38. “A person susceptible to “wanderlust” is not so much addicted to movement as committed to transformation.” – Pico Iyer

39. “Do not follow where the path may lead. Go instead where there is no path and leave a trail.” – Ralph Waldo Emerson

40. “Life is either a daring adventure or nothing at all.” – Helen Keller

41. “No one realises how beautiful it is to travel until he comes home and rests his head on his old, familiar pillow.” – Lin Yutang

42. “I travel because it makes me realise how much I haven’t seen, how much I’m not going to see, and how much I still need to see.” – Carew Papritz

43. “When preparing to travel, lay out all your clothes and all your money. Then take half the clothes and twice the money.” – Susan Heller

44. “Because in the end, you won’t remember the time you spent working in the office or mowing your lawn. Climb that goddamn mountain.” – Jack Kerouac

45. “If you’re twenty-two, physically fit, hungry to learn and be better, I urge you to travel – as far and as widely as possible. Sleep on floors if you have to. Find out how other people live and eat and cook. Learn from them – wherever you go.” – Anthony Bourdain

46. “If you reject the food, ignore the customs, fear the religion and avoid the people, you might better stay at home.” – James Michener

47.  “Our happiest moments as tourists always seem to come when we stumble upon one thing while in pursuit of something else.” – Lawrence Block

48. “I have found out that there ain’t no surer way to find out whether you like people or hate them, than to travel with them.” – Mark Twain

49. “To my mind, the greatest reward and luxury of travel is to be able to experience everyday things as if for the first time, to be in a position in which almost nothing is so familiar it is taken for granted.” – Bill Bryson

50. “A journey is best measured in friends, rather than miles.” – Tim Cahill

What are you waiting for? Grab your backpack and go!

2 thoughts on “50 Travel Quotes to Inspire Your Next Adventure”