Hostels under the ‘Base’ umbrella are known for being party hostels, and Nomads Byron Bay did not disappoint. We arrived at 8pm and dumped our bags in the room, meeting some of our new roommates briefly before heading downstairs to the packed central courtyard. There was a free BBQ (hotdogs) and everyone was sat around chatting and drinking on the hammocks and benches. One big thing we noticed and instantly liked was that no one was on their phone. We honestly couldn’t see a single phone in hand, which was a first, but apparently a pattern with a lot of hostels in Byron Bay. People disconnected from social media, and engaged with everyone around them! The atmosphere was great, we felt safe and had so much fun. It’s a shame the communal courtyard shut at 10pm when people were re-directed to the local bars and clubs – but this is considerate for those backpackers looking for an early nights sleep.

Cleanliness: 7/10
No major issues, but the room wasn’t as clean as it could have been. There were dark stains all over the carpet and the metal on the bed was rusted, which left brown marks on the clothes/towels we had draped over the bars. The communal areas were the pretty standard level of cleanliness, considering the size of the hostel. All bathrooms were communal, and the floors always wet…

Facilities: 9/10
Nomads had something for everyone –  bike and surfboard hire, computer access, free wifi (although pretty slow) and multiple unisex bathrooms on every level. The outside courtyard had benches, hammocks and hot tubs, although we didn’t see anyone using them as it was waaaay hot this time of year. Inside they had a pool table, ping pong, and seating areas to hang out and read. As the hostel hosted many people, it was always full and the activities/facilities full. 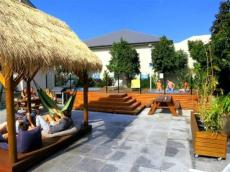 Location: 10/10
Byron Bay is pretty small anyway, but Nomads is bang in the centre of everything. Next door to Aldi, liquor shops and cafes, and a short walk to the main bus stop and beach. Couldn’t ask for a better location!

Room: 7/10
Our 6-bed dorm was full at all times, and pretty cramped. Lockers were small and fitted on the wall, so only valuables were able to fit, leaving all the backpacks and remaining items on the floor. There were no shelves to put items on, so it was difficult finding a way to organise anything. A short stay here is fine, but if I was staying longer I’d want a room with a bigger locker and more shelving space so I could organise my stuff a bit better. The room had a french window out to the small balcony that faced into the central courtyard. The best part about the room was the air-con, which worked perfectly to cool the room overnight, giving us a good sleep after a night out. There were four plug sockets, under the air conditioning unit, which meant only four people could charge any electronic device at any time. It was close to one bunk bed, which was awkward for everyone else on the other beds. The beds did not offer any form of shelving or personal lights and were very squeaky. Anyone coming in from a late night out would wake up the whole room while climbing into bed!

Security: 9/10
Nomads reception area was large, and due to the size of the hostel, there were people walking in and out of the building throughout the day – they would have access to any part of the building except the dorms. At around 10pm the main doors were locked and you could only get in through a side door, where a member of staff would check to make sure you had your room card. Security also patrolled the entrance of the building, ensuring you weren’t loitering and drinking outside at 10pm (a strict “dry” policy at night). We were given a coded room card each, which was only used to gain access to your specific room, and thankfully, the door automatically shut behind you. The room only had small lockers for valuable items, which required a padlock. We did not see any additional lockers throughout the hostel. Nomads also offer a baggage room, which was behind a staffed desk, but anyone could have accessed it during the day.

Staff: 8/10
We were having trouble with our Base Jump cards, and this meant Nomads hadn’t been able to reserve 2 beds for us. Thankfully Lexi was able to help us out, over the phone, and booked us in a 6-bed dorm (free upgrade from the 10-bed dorm) for our two-night stay. We also spoke to a few guys on reception who were happy to help and answer any questions we had.

Overall: We’d stay here again for the nightlife, but only for a few days at a time. If you like to party, worth staying here if you’re in Byron Bay.

Pin it for later!

One thought on “Nomads Byron Bay”