Boxing Day in Sydney, Australia, is spent much differently than you would expect. From the early hours of the morning, over 600,000 people line up along the waterfront and squeeze in close to catch a glimpse of the water. The harbour is full of boats, large and small, carrying excited people, eager for the best view. At home, and around the world, millions of people are watching the live-stream on TV and online. No other event of its kind attracts such huge media coverage.

The Sydney to Hobart Yacht Race is an annual Aussie tradition, dating back to 1945, and hosted by the Cruising Yacht Club of Australia (CYCA). The race starts promptly at 1pm in Sydney, New South Wales and ends when the boats reach Hobart, Tasmania, an island state located off the coast of Southern Australian. The distance is approximately 1170 kilometres and takes a few days to complete.

Wanting to take part in the event, we woke up early Boxing Day morning and headed down to Watson’s Bay for the start of the race. The traffic was bad, and most of the beaches already full, so we worried about making it to the Watson’s Bay Lighthouse in time. As we followed the crowds of people, we came across a small, quiet beach and walked down the stairs to the sand. Wondering why anyone would pass up such a great view, it was only once we reached the bottom did we realise this spot was secluded for good reason… it’s a nudist beach!!! Frantically running back up the stairs, but not before seeing a few naked people in the water, we left the beach and followed the other fully clothed people to the cliff top. 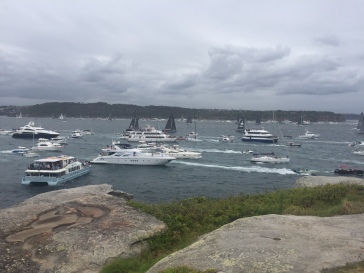 The yachts passed by quickly, but we enjoyed watching them sail along the water and could feel the excitement of the crowd. Having never seen or participated in a yacht race before, I assumed the first to reach Hobart, won. As it turns out, two winners are declared: one for Line Honours (being the first to cross the finish line) and one on Handicap (taking into account yacht size, weight, experience, time, etc). While there have been a range of past winners from all over the world, only 6 yachts have claimed both titles in the same year. What interested me the most, was finding out there is no prize for winning, and entrants compete for the honour of the title (although nowadays, Rolex, the race sponsor, gives each of the winning captains one of their watches)!

In 1945, Peter Luke and his mates intended to cruise down to Hobart, but a British Royal Navy Officer, Captain John Illingworth, suggested a race – and the event was born! The initial start consisted of 9 yachts,  but only 8 completed the journey to Hobart. Captain John Illingworth won, with a time of 6 days, 14 hours and 22 minutes (pictured below), whereas Peter Luke set a record for longest-ever time to complete the journey (which still stands), at 11 days, 6 hours, and 20 minutes. 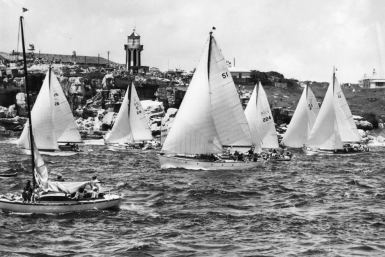 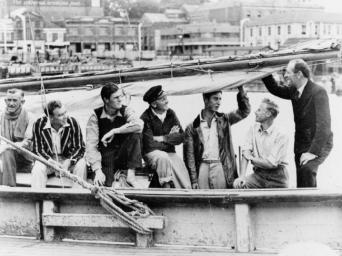 Each year, the competition becomes more difficult, as more yachts participate. In 2016, the Perpetual Loyal crossed the finish line with a time of 1 day, 13 hours and 31 minutes,  This year, their impossible record was beat by Wild Oats XI, but they were penalised over an illegal manoeuvre at the start of the race in Sydney, adding an extra hour to their overall time. The Comanche, who initially came second, was given the title and set a new record of 1 day, 9 hours and 15 minutes.

Now that we have seen the start of the race, we hope to one day be at the finish line and see the winners enter Hobart!