Earlier this week, we went on a hunt to find the oldest pub in Sydney. The answer is not as straight forward as you think, and a few pubs in the city claim similar titles.

Google says the oldest pub is the ‘Fortune of War’ on The Rocks. But when you search on Apple Maps, 2 other pubs on The Rocks pop up, claiming to also be to oldest, for various other reasons.

This had to be the first on our list, and it was also the closest of the 5 to Circular Quay subway station, where we’d gotten off. Build in 1828, Fortune of War is apparently the oldest continuously licensed pub in Sydney. It got it’s name from being a popular “first and last stop ashore” for Australian soldiers departing Sydney to experience the ‘Fortune of War’. It’s still a popular place for Veterans to meet up on Anzac Day. 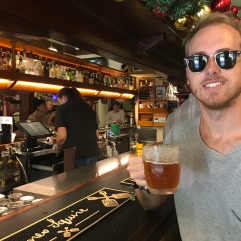 The pub’s wooden bar greets you immediately as soon as you enter, forming a rectangular shape in the centre of the main room, with seats surrounding the bar and against the walls. It was at about 40% capacity when we arrived at 2pm on a Tuesday, with a mixture of locals and visitors. It wasn’t a surprise that the majority of the tourists were Brits looking for a slice of home.

We were greeted by a friendly barmaid (I think her name was Jen), who told us a bit about the history of the pub and recommended some beers from the drinks menu. They had a really decent selection of local beers – I went for ‘Little Creatures’ IPA which is brewed in Western Australia. It tasted great, and cost $11 for a pint, which is average for a beer on The Rocks.

The next pub we visited is basically second in line to the ‘Oldest Pub in Sydney’ throne, The Lord Nelson Brewery Hotel. Established in 1841, it is Sydney’s oldest continually licensed hotel.

The pub had seating outside, but it was a sweltering 32°c, so no-one was outside as there was little shade. Inside it was pretty spacious, with seating at the bar and tables for different sized groups dotted around. The pub was at about 20% capacity when we went at 3pm. 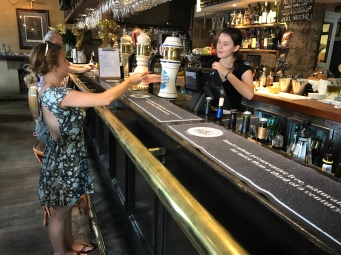 The service was unremarkable, and we were simply directed to the beer menu which went around the top of the bar. The schooner of Quayle Summer Ale was a refreshing, easy drinking ale, brewed in-house. If you walk around the premises, you can see the brewery room on the ground level through glass windows, or go upstairs to the first floor where our can dine in their Australia cuisine restaurant.

Due to being slightly dehydrated from our walk in the summer sun, the beer didn’t last long, and we were soon on our way to the next pub.

The Hero of Waterloo:

This pub is just down the road from The Lord Nelson, on the corner of Lower Fort and Windmill Street at Miller’s Point. It’s situated on a slope that almost looks like the street and surrounding buildings were built around this one pub. It’s build out of sandstone from The Argyle Cut, a stairway between two nearby streets that is still there today. 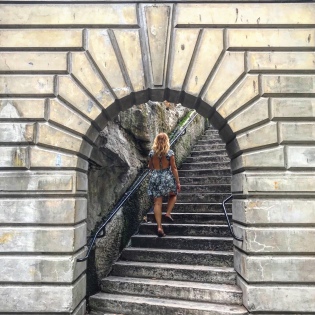 It almost looked closed from the outside, and even when we went in, there were just a few regulars who turned there heads when they heard our foreign accents. This was probably due to the time of day that we visited (4pm).

Built in 1843, the pub had a quaint, historic feel, and the interior reminded us of some of the old bars in Prague. Large wooden beams across the ceiling, stone walls carved by convicts, that made it look like an old dungeon.  The staff seemed friendly and were quick to notice that we were new to the area. The pub was at around 10% capacity while we were there at 4pm.

We didn’t get a chance to check out the dungeon, but will return when we’re back in Sydney to get a quick tour.

With so many different factors, I don’t think we’ll ever know for sure which of them holds the title for ‘The Oldest pub in Sydney’, but it was a fun excuse to try them all out.

2 thoughts on “The Oldest Pub in Sydney”